You are here: Home / London Arbitration / 2014 LCIA Rules Of Arbitration

The London Court of International Arbitration (LCIA) is one of the most important arbitration institutions in the world, along with the ICC in Paris, the DIAC in Dubai, the SIAC in Singapore, the HKIAC in Hong Kong and the ICDR in the United States.

Over the past 15 years the international arbitration legal landscape has changed significantly, and the LCIA Rules attempt to address some of the biggest changes. The amendment of the LCIA Rules has been thorough, and many of the articles, which may be found below, have been updated.

The most important modifications include:

The inclusion of emergency arbitrator provisions was necessary to keep up with the evolving rules of other leading arbitration institutions, and the ICC, the ICDR, the HKIAC and the SIAC have included such provisions successfully in their own rules over the past few years.

The most novel change to the LCIA Rules of Arbitration is the inclusion of new guidelines for the conduct of the parties’ legal representatives, which is included as an annex to the 2014 rules. In recent years, legal counsel have become increasingly unruly, performing such tactics as challenging arbitrators repeatedly without valid reasons and performing other tactics designed to disrupt the normal progression of international arbitrations. Sadly, some legal counsel have also resorted to lying to the arbitral tribunal or presenting false evidence.

The new LCIA Rules of Arbitration address such issues by requiring each party to ensure that its lawyers comply with its guidelines and by also creating a new complaint mechanism whereby disputes concerning breaches of the guidelines may be resolved. The guidelines for the conduct of the parties’ legal representatives are very short and designed to stop clearly abusive conduct on the part of legal counsel. In particular, they prohibit wrongly challenging the jurisdiction of the arbitral tribunal on false grounds, lying to the arbitral tribunal or the LCIA, presenting false evidence in international arbitrations, and attempting to wrongly influence the arbitral tribunal in a unilateral manner. They read :

Paragraph 2: A legal representative should not engage in activities intended unfairly to obstruct the arbitration or to jeopardise the finality of any award, including repeated challenges to an arbitrator’s appointment or to the jurisdiction or authority of the Arbitral Tribunal known to be unfounded by that legal representative.

Paragraph 3: A legal representative should not knowingly make any false statement to the Arbitral Tribunal or the LCIA Court.

Paragraph 4: A legal representative should not knowingly procure or assist in the preparation of or rely upon any false evidence presented to the Arbitral Tribunal or the LCIA Court.

Paragraph 5: A legal representative should not knowingly conceal or assist in the concealment of any document (or any part thereof) which is ordered to be produced by the Arbitral Tribunal.

Paragraph 6: During the arbitration proceedings, a legal representative should not deliberately initiate or attempt to initiate with any member of the Arbitral Tribunal or with any member of the LCIA Court making any determination or decision in regard to the arbitration (but not including the Registrar) any unilateral contact relating to the arbitration or the parties’ dispute, which has not been disclosed in writing prior to or shortly after the time of such contact to all other parties, all members of the Arbitral Tribunal (if comprised of more than one arbitrator) and the Registrar in accordance with Article 13.4.

Paragraph 7: In accordance with Articles 18.5 and 18.6, the Arbitral Tribunal may decide whether a legal representative has violated these general guidelines and, if so, how to exercise its discretion to impose any or all of the sanctions listed in Article 18.6. 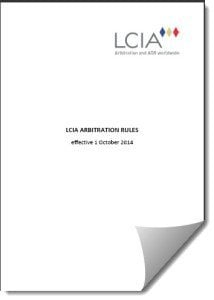