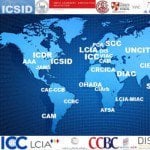 Companies frequently include international arbitration agreements in their commercial contracts with businesses located in other States, so that if a dispute arises they are obligated to arbitrate before neutral arbitrators rather than to pursue litigation before a foreign court. A relatively recent phenomenon, investor-State arbitration concerns arbitration proceedings by foreign investors against States on the basis of bilateral or multilateral investment treaties, or domestic laws providing consent to arbitration.

Thanks to the Convention on the Recognition and Enforcement of Foreign Arbitral Awards of 1958, the awards of international arbitrators can be readily enforced in over three-quarters of the countries of the world, providing one of key advantages of arbitration as compared to domestic litigation to resolve international disputes.