You are here: Home / Introduction to Investment Arbitration

Investment arbitration is a procedure to resolve disputes between foreign investors and host States (also called Investor-State Dispute Settlement or ISDS). The possibility for a foreign investor to sue a host State is a guarantee for the foreign investor that, in the case of a dispute, it will have access to independent and qualified arbitrators who will solve the dispute and render an enforceable award.

This allows the foreign investor to bypass national jurisdictions that might be perceived to be biased or to lack independence, and to resolve the dispute in accordance to different protections afforded under international treaties.

For a foreign investor to be able to initiate an investment arbitration, a host State must have given consent to this.

While consent is typically nationality-based, the applicable nationality may be that of an individual or a legal entity, providing some flexibility in terms of the treaty or treaties under which an investment arbitration may be initiated.

While starting from a very low base in the 1970’s, the number of new ICSID investment arbitrations increased significantly in the late 1990’s. 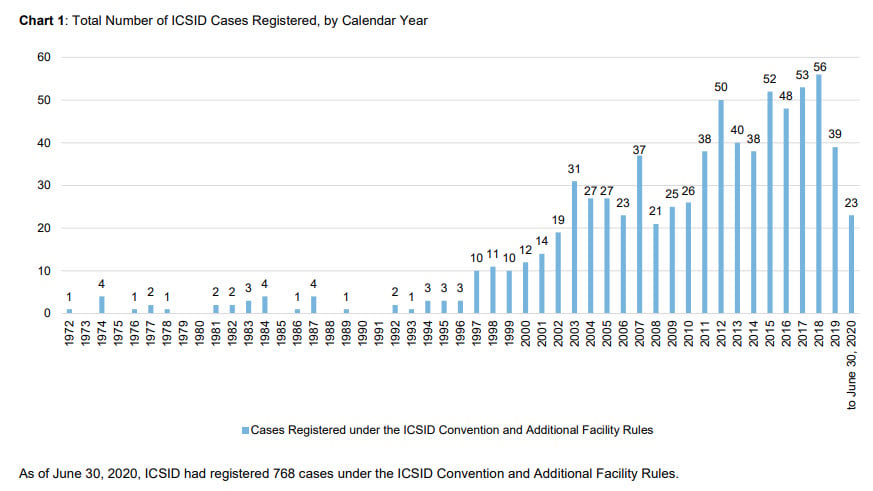 The substantive protections provided to foreign investors depend on the international investment agreement upon which their claims are brought. They are different from the protections afforded by the domestic law of the host State, and at times the protection they afford may be greater.

The most common protections afforded to foreign investors, with respect to which there is a significant volume of publicly-available arbitral jurisprudence, include:

Initiation of an Investment Arbitration

Most investment arbitration agreements provide for a cooling-off period, frequently of 6 months, where the investor and the host State are invited to engage in negotiations in order to find an amicable solution. The starting point of the cooling-off period is typically a Notice of Intent to initiate arbitration proceeding against the host State. In case of a failure to settle the dispute over the cooling-off period, as is common (many States prefer to wait and see whether a foreign investor is truly willing to pay the high costs that are required to pursue an investment arbitration), the foreign investor must file a Request for Arbitration in accordance with the applicable rules of arbitration. The vast majority of disputes do not settle at this stage.

In some cases, the investor may be obliged by the arbitration agreement upon which its claim is based to exhaust all effective domestic legal remedies prior to initiating a claim in arbitration.

To the contrary, other arbitration agreements force the investor to either chose to sue the state before domestic courts or before an international arbitral tribunal (so-called “fork in the road” clauses). It is very important for a foreign investor to review the instrument containing the host State’s consent to arbitration in detail prior to initiating proceedings, since it may be barred from later initiating arbitration if courts of the host State are first approached to resolve the dispute.

The best known arbitration institution administrating investment arbitrations is the International Centre for Settlement of Investment Disputes (ICSID). Based in Washington, ICSID arbitrations involving parties from Europe or Asia are often held at the World Bank’s Paris headquarters.

Frequently, investors are provided a choice of the arbitral institution they would like to entrust with administering their dispute. This choice depends upon the terms of the arbitration agreement upon which the dispute is brought.

The average investment arbitration takes slightly over three years. According to the ICSID’s statistics, in 2015 the average arbitration (between the date of an arbitral tribunal’s constitution to its conclusion) lasted  “on average, 39 months.” The longest continuing ICSID dispute in history continued over a span of nineteen years, but this was truly exceptional and involved the constitution of two separate arbitral tribunals.

There are no appeals of investment arbitration awards, although the arbitral rules under which they are brought do provide limited grounds for the annulment or setting aside of an arbitral award.

For instance, the ICSID Rules allow for the annulment of an award if:

–  the Tribunal was not properly constituted;
– the Tribunal has manifestly exceeded its powers;
– there was corruption on the part of a member of the Tribunal;
– there has been a serious departure from a fundamental rule of procedure; or
– that the award has failed to state the reasons on which it is based.

The parties must cover the expenses of the arbitral tribunal, the arbitration institution, the experts’ fees and the legal fees of the counsels. Some specialized arbitration law firms, called “arbitration boutiques”, provide legal services for investment arbitrations at more competitive legal fees, which can reduce the overall cost. Aceris is an example of such a boutique.

If a party has difficulties covering the costs of the arbitration, there is also a possibility to obtain funding from Third Party Funders, who provide funds to pursue investment arbitrations in return for a stake in the financial outcome of the case. Obtaining third-party funding is a difficult and time-intensive process, however, and it is only provided for what appear to be the strongest cases.

The ICSID Convention provides the rules for the enforcement of international investment awards that host States are bound to respect (Articles 53 to 55 of the ICSID Convention). According to the ICSID Convention, “Each Contracting State shall recognize an award rendered pursuant to this Convention as binding and enforce the pecuniary obligations imposed by that award within its territories as if it were a final judgment of a court in that State.”

If the host State is not a party to the ICSID Convention, then enforcement of the award is carried out in accordance with the Convention on the Recognition and Enforcement of Foreign Arbitral Awards of 1958. According to this Convention the awards of international arbitrators can be enforced in over 150 countries (approximately 3/4 of countries on earth).

The most experienced law firms specialized in investment arbitration are based in Geneva, Paris, London, New York and Washington, such as Aceris Law.

According to studies, Claimants win some or all of their claims approximately 41% of the time. Respondents (States) win approximately 59% of the time, with roughly one-quarter of claims being dismissed for lack of jurisdiction.

Whereas the average claim is for just under USD 500 million, the average award is for only USD 76 million, suggesting that many initial claims are greatly exaggerated. Purely speculative claims have a very low chance of success.

The successful party recovers a portion of their costs in nearly half of all cases, as costs may follow the event in investment arbitration.

The Future of Investment Arbitration

Some prominent commentators have been predicting the demise of investment arbitration for many years. Yet, it is not easy to unwind the many treaties that are already in place, so it is unlikely to disappear in the near future.