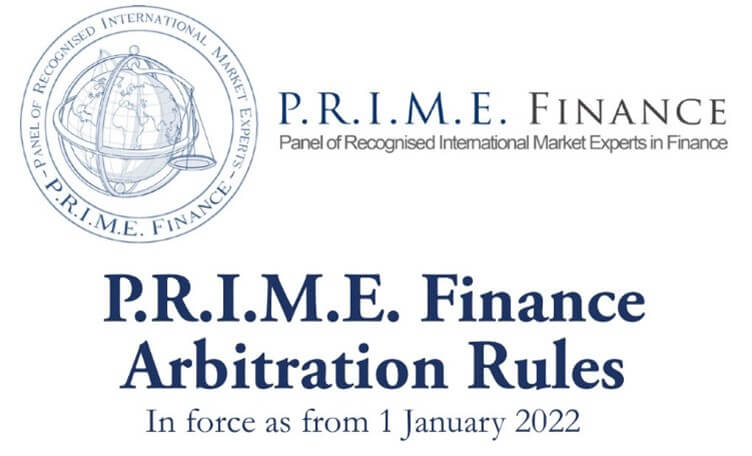 Established in 2012 in The Hague, Netherlands, P.R.I.M.E. Finance is an independent, non-profit foundation of finance experts aiming to reduce legal uncertainty and systemic risk and promote confidence in global finance. As indicated on its website, P.R.I.M.E. Finance’s main activities involve (i) dispute resolution services, including arbitration (under the 2022 P.R.I.M.E. Rules discussed herein), mediation (under the 2016 P.R.I.M.E. Finance Mediation Rules, which are based on the 1980 UNCITRAL Conciliation Rules) and engagement of expert witnesses, (ii) judicial training, (iii) continuing education via conferences, as well as (iv) maintenance of a central database of precedent and materials in collaboration with LexisNexis.

The P.R.I.M.E Finance Arbitration Rules are tailored to cover a wide range of financial disputes, related to, inter alia, “derivatives, sovereign lending, investment and advisory banking, financing, private equity, fintech and sustainable finance”, as explained on its website. The P.R.I.M.E Finance Arbitration Rules are also institutional rules, administered by the Permanent Court of Arbitration (“PCA”), which has extensive experience and expertise in dispute resolution.

While the often strictly-regulated finance sector has not always favoured arbitration for the resolution of financial disputes, as opposed to the construction industry for instance, it can certainly benefit from the advantages that arbitration has to offer, particularly the appointment of arbitrators with expertise in increasingly complex financial disputes, procedural flexibility, as well as the finality and enforceability of resulting awards in nearly all countries across the globe (170 States with the accession of Turkmenistan on 4 May 2022) under the 1958 New York Convention on the Recognition and Enforcement of Foreign Arbitral Awards.

The 2016 P.R.I.M.E. Rules previously in force were based on the 2010 UNCITRAL Arbitration Rules. The 2022 P.R.I.M.E. Rules introduce a series of changes to enhance the efficiency of arbitrations, as discussed below.

Fees of the Arbitral Tribunal

Under the new Rules, parties are now in a better position to predict and monitor the fees of the arbitral tribunal, and to plan their finances accordingly.

The new provisions displace the previously applicable default “list-procedure”, pursuant to which the appointing authority had to send both parties an identical list of at least three candidates, and each party would then return the list “after having deleted the name or names to which it objects and numbered the remaining names on the list in the order of its preference” (Article 8(2), Article 9(3) and Article 10(3) of 2016 P.R.I.M.E. Rules).

The “list-procedure” was not harmful, but it is time-consuming and often fruitless, unless the parties are willing to cooperate (which is frankly rare). The simplified procedure adopted under the revised Rules is thus preferable, as it should reduce both the time needed to constitute the tribunal and the associated administrative costs of the PCA.

Modified Article 18 (Place of Arbitration) of the 2022 P.R.I.M.E. Rules introduces the possibility of holding virtual hearings and procedural meetings (“the arbitral tribunal may meet for any purpose, including hearings, in person at any location it considers appropriate or through means of communication that do not require physical presence”). Virtual hearings became the norm during the COVID-19 pandemic, so this change comes as no surprise.

The possibility to hold virtual hearings is then reiterated in Article 27(3) (Hearings) of the 2022 P.R.I.M.E. Rules, which provides, “The arbitral tribunal may direct that witnesses, including expert witnesses, be examined in any manner it considers appropriate, including through means of communication that do not require physical presence.”

Under the new Article 35 of the 2022 P.R.I.M.E. Rules, the tribunal is now empowered, upon the request of a party, to make an early determination on whether a claim or defence is manifestly a) “outside the jurisdiction of the arbitral tribunal”, b) “inadmissible”, or c) “without legal merit.”

The aim of an early determination is, amongst others, to act as a deterrent to frivolous claims. A similar provision is also found in Article 22.1(viii) (Additional Powers) of the 2020 LCIA Arbitration Rules.

The 2022 P.R.I.M.E. Rules include new, detailed provisions on joinder of additional parties (Article 31), consolidation of two or more pending arbitrations (Article 32), as well as holding a single arbitration under multiple “compatible” contracts (Article 33).

They also include a new provision allowing for coordination of proceedings “by aligning specific procedural aspects of two or more pending arbitrations”, where a) “the same arbitral tribunal is constituted in each arbitration” and b) “a common question of law or fact arises in all the arbitrations” (Article 34 of 2022 P.R.I.M.E. Rules).

Under Article 29(1) (Amicus Curiae) of the 2022 P.R.I.M.E. Rules, arbitral tribunals are also empowered, where necessary or appropriate for the determination of the dispute, to invite or grant leave to a third party to appear as amicus curiae and make submissions on any issues relevant for the proceedings.

Under Article 39.10 (Awards) of the 2022 P.R.I.M.E. Rules, anonymised copies of awards may also be published, unless any party objects to the publication within 30 days of receipt of an award.

The new Article 17 (Expedited Proceedings) of the 2022 P.R.I.M.E. Rules also lays down a detailed provision for expedited proceedings, unlike Article 2a (Expedited Proceedings) of the previously applicable 2016 P.R.I.M.E. Rules, which merely provided that “[t]he parties may agree to shorten time lines set out in these Rules”, without further guidance. The expedited resolution of disputes is always welcome, yet not unique to the financial sector.

In conclusion, P.R.I.M.E. Finance has made a real effort to ensure that its arbitration rules remain fully fit-for-purpose for users in the financial sector and reflect current best practices in international arbitration. The changes introduced by the 2022 P.R.I.M.E Finance Arbitration Rules should promote efficiency, transparency, greater predictability of the arbitral tribunal’s fees and an overall speedier resolution of disputes.

To have potential financial disputes resolved via the 2022 P.R.I.M.E Finance Arbitration Rules, the model arbitration clause available here may simply be inserted into a financial agreement.