You are here: Home / International Arbitration Law / The Standard of Proof in Arbitration

In The Burden of Proof in Arbitration, a distinction was made between the burden of proof, defined as “the duty of proving a disputed assertion or charge”, and the standard of proof, which “determines the level of certainty and the degree of evidence necessary to establish proof in a criminal or civil proceeding”, according to the Merriam-Webster Dictionary.

This note will focus on the latter concept: the standard of proof in international arbitration. The standard of proof defines the quantity of evidence required to establish an issue or a case, as provided by the tribunal in the Rompetrol Group N.V. v. Romania case.[1] It is relevant because it determines the importance granted to the evidence presented by the parties. 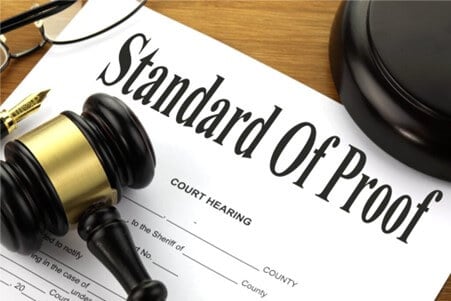 Formally, there are two primary approaches to determining the standard of proof. These approaches depend on the elected system of law, which can be civil law or common law legal systems.

Civil law jurisdictions, namely those pertaining to countries that were former French, Dutch, German, Spanish or Portuguese colonies or protectorates, among others, have failed to codify a standard of proof.

Secondary sources, however, have identified the applicable standard of proof as the “inner conviction” or “free evaluation of evidence” standard. This standard tends to question whether the doubts surrounding a particular claim or defence are addressed and silenced, without necessarily excluding them completely.

In fact, this standard has been criticized, as it is considered a description of the way in which judges decide a case, rather than an objective standard of proof. It is a highly intuitive standard, which relies upon the perception of the evidence by the judges. Overall, judges make a discretionary assessment when determining the importance of evidence. In France, for instance, court practice demands that the evidence establishes a probability that is sufficient to convince the judge.

For civil matters, the standard of proof is the “preponderance of the evidence” standard, also known as the “balance of probabilities”. This standard requires that there is greater evidence in favour of a particular claim, as opposed to the evidence adduced by the counterparty against that claim. In other words, the claim needs to be proven to be more likely than not.

For criminal matters, the standard of proof is more stringent. Proving a claim requires achieving a standard of “beyond a reasonable doubt”.

There are some grey areas, however. For instance, in quasi-criminal civil disputes in the United States, where important individual rights are involved, a more stringent standard of proof is required, which is why judges have accepted the standard of “clear and convincing evidence”. “Clear” refers to the certainty and lack of ambiguity that is contributed by the evidence. “Convincing” refers to the reasonable and persuasive qualities of the evidence. This standard lies in between the “preponderance of the evidence” and the “beyond reasonable doubt” standards.

Standard of Proof in Arbitration

Arbitration laws and rules rarely provide any principles for determining the applicable standard of proof. In fact, some consider this silence to be one of the strengths of international arbitration, as tribunals hold great flexibility in terms of determining the evidentiary process.

Standard of Proof in Arbitral Practice

The answer, in fact, depends on whether the standard of proof is a procedural matter or a substantive matter. There is, however, no clear response to this question. The standard of proof is treated as a procedural matter in most common law jurisdictions, although it is treated as a substantive matter in most civil law jurisdictions.

According to Blavi and Vial, there is an unconfirmed impression that tribunals tend to consider the standard of proof a substantive matter, thus turning to the governing law or, alternatively, to autonomous standards of proof.[2]

Despite the distinction and the analysis presented above, it is widely accepted that arbitral tribunals apply by default the “preponderance of the evidence” standard unless the circumstances of the case require an alternative standard.

While arbitral tribunals apply the “preponderance of the evidence” standard by default to issues including breaches of standards of protection and defences, claims to damages, or stays of enforcement, other standards can also be deemed applicable by arbitrators.

For instance, a heightened standard of “clear and convincing evidence” can be applied to consent-related issues or other matters which are particularly delicate. A lower “prima facie” standard can be applied to claims regarding interim measures, issues of jurisdiction, or facts which are objectively too difficult to prove.

Despite arbitration laws and rules being silent on the applicability of the different standards of proof, there are nonetheless various aspects upon which these depend, such as:[3]

In line with the above, the following are some examples of issues which require the application of alternative standards by tribunals:

The Procedural Phase in Which the Allegation Is Made

– Standard of Proof for Interim Measures

This standard has been considered to be lower than the “preponderance of the evidence” standard. This was done intentionally, as the drafters primarily planned to filter out frivolous requests. Moreover, this interpretation was confirmed by the tribunal in the decision rendered in the Constellation Overseas v. Alperton Capital case, where the standard for granting interim measures was merely demonstrating that the claim was, indeed, not frivolous.[4]

– Standard of Proof for Issues of Jurisdiction

Tribunals, and arbitral institutions, may apply the prima facie standard for jurisdictional purposes. Without entering into proving the claims, the parties must be able to show, prima facie, that the claims fall within the scope of the arbitration agreement.

The Allegation per Se

– Standard of Proof for Claims Which Are Difficult to Prove

The prima facie standard, which is significantly lower than the “preponderance of the evidence” standard, can also be applied when a tribunal considers that the facts are too hard to prove.

– Standard of Proof in Claims Regarding Fraud, Corruption and/or Bad Faith

In these cases, practice is not uniform. However, there has been a tendency by tribunals to raise the standard of proof for claims involving fraud, corruption and/or bad faith. According to some tribunals, the standard required by tribunals is that of “clear and convincing evidence”. Other tribunals still adhere to the “preponderance of the evidence” standard, even rendering circumstantial evidence sufficient to consider a claim as true. This will in large part depend on the tribunal and the circumstances of each claim.

Whether the Allegation Is Contested

– Standard of Proof in Arbitration with Absent/Defaulted Counterparty

What is particularly interesting is that given an arbitral tribunal’s general tendency to apply the “preponderance of the evidence” standard, one party’s absence will lower the counterparty’s threshold to reach this standard. In other words, if the claim is not contested, there are more chances that a tribunal will consider the claim “more likely than not” to be proven. This is one reason why respondents should defend themselves in arbitration.

There are certain occasions in which arbitration rules include the word “manifest” to, in principle, provide a heightened standard for certain actions.

Similarly, Article 52(1)(b) of the ICSID Convention provides that “[e]ither party may request annulment of the award by an application in writing addressed to the Secretary-General on one or more of the following grounds: […] (b) that the Tribunal has manifestly exceeded its powers; […]”. In this case, the term “manifestly” requires a serious departure from a fundamental rule of procedure,[5] which is subject to a heightened standard of proof.

The interpretation of the term, however, cannot be understood as a general rule. Article 57 of the ICSID Convention reads: “A party may propose to a Commission or Tribunal the disqualification of any of its members on account of any fact indicating a manifest lack of the qualities required by paragraph (1) of Article 14. A […]”. In this case, the term “manifest” has been interpreted to mean “an objective standard based on a reasonable evaluation of the evidence by a third party”, rendering the mere appearance of dependence or bias sufficient to disqualify an arbitrator.[6]

This different interpretation of the term “manifest” has created internal contradictions, reinforcing the notion that the standard of proof will be determined on a case-to-case basis.

Compared to proceedings before local courts, international arbitration enjoys more flexibility, but the “preponderance of the evidence” standard is the commonly used standard of proof. However, this will also ultimately depend on the issue in question, as well as on the arbitration agreement.

Considering the above, the standard of proof plays an essential role in international arbitration, as it ensures an objective evaluation of claims and defences. Above all, it ensures that a minimum level of proof is required of the parties, appropriate to the specifics of each case.

[2] F. Blavi and G. Vial, The Burden of Proof in International Commercial Arbitration: Are We Allowed to Adjust the Scales (2016), 39 Hastings International and Comparative Law Review 41, 47.