Our client, the Barotseland National Freedom Alliance, has challenged the Republic of Zambia to PCA arbitration in The Hague to settle the long-running dispute concerning the legal status of Barotseland, a former British protectorate, in a peaceful manner.

Under the terms of a bilateral treaty signed in 1964 under the auspices of the United Kingdom, named the Barotseland Agreement 1964, Barotseland was to become an autonomous region within the Republic of Zambia.

The first President of Zambia, Kenneth Kaunda, flouted this agreement and attempted to destroy all remnants of Barotseland’s sovereignty, including its sophisticated political and judicial system, while also expropriating Barotseland’s treasury and undermining the power of Barotseland’s rulers, despite the fact that Barotseland had long been recognized as a Nation which was a subject of international law.

Many human rights violations continue in Barotseland today that are attributable to the Government of Zambia. In a separate but complimentary legal procedure, the BNFA has therefore also petitioned the African Commission for Human and People’s Rights (ACHPR), based in Banjul, to bring them to an end.

In 2012, a Barotseland National Council accepted Zambia’s abrogation of the Barotseland Agreement 1964, terminating the treaty by which Barotseland initially joined Zambia. (View BBC news coverage.)  Barotseland is a nation in South Central Africa, whose territory traditionally extended to roughly ten times the size of Belgium.

In 2013, Barotseland also became a member of the UNPO, the Unrepresented Nations and Peoples Organization, joining Tibet and Taiwan at this international organization dedicated to giving a voice to peoples who are currently unrepresented at the United Nations. Many modern States, including Estonia, Latvia, Armenia and East Timor, were former members of the UNPO. 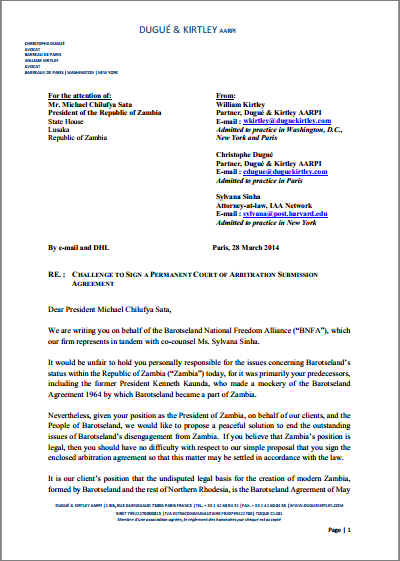 Letter To President Sata Of Zambia 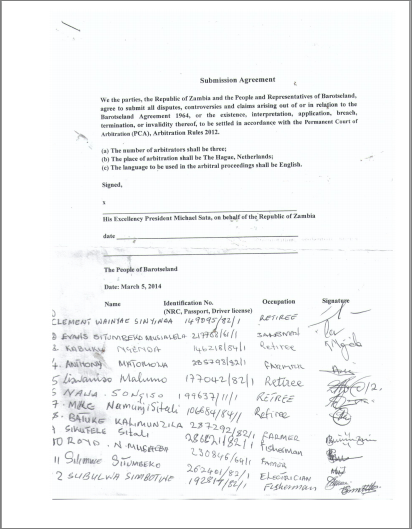 Dugué & Kirtley AARPI and Ms. Sylvana Sinha, who is a member of the International Arbitration Attorney Network, represent the BNFA, an umbrella group of Barotse activists formed for the purpose of coordinating the implementation of the sovereign resolutions of March 2012 Barotse National Council in a peaceful manner.