You are here: Home / Arbitration Information / Definition of Arbitration

Arbitration is a dispute resolution process agreed between parties in which the dispute is submitted to one or more arbitrators who issue an award. It is an alternative dispute resolution (ADR) mechanism because it allows the parties to resolve their dispute outside of State courts, i.e., without litigation.

Among alternative dispute resolution methods, arbitration is defined as a jurisdictional means of settling disputes because of the power given to arbitrators to decide a case and issue an award. Different from mediation and negotiations, the parties have no say on the solution found by the arbitral tribunal, which is imposed on them in a final and binding manner.

The main characteristic of arbitration is its consensual nature. A dispute may be solved by the arbitrator only if both parties have agreed to this. The parties’ agreement usually takes the form of an arbitration clause in the contract, prior to the occurrence of a dispute. Once the dispute has emerged, the parties may agree to submit the particular dispute to an arbitral tribunal.

Arbitration may be domestic or international. Usually, arbitrations are international when the parties are of different nationalities and/or when international trade interests are at stake. This definition may vary depending on the law governing the parties’ agreement to arbitrate. 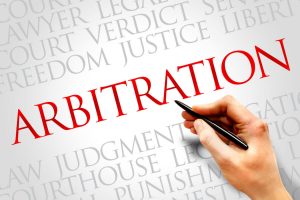 There are different type of arbitrations depending on the subject matter in dispute, for example commercial, construction, investor-State or investment arbitrations (ISDS), etc.

Advantages of Arbitration Over Litigation

The main advantage of arbitration is the possibility to have a tailored made dispute resolution process that adapts to the particularities of the dispute. For instance, the parties may agree on the person of the arbitrator or at least on the criteria that the arbitrator should fulfil. The arbitral proceedings may be less expensive than litigation considering the absence of appeal in most cases, which makes the process shorter, and thanks to the 1958 Convention on the Recognition and Enforcement of Foreign Arbitral Awards, the resulting arbitral award can be enforced in 154 nations, unlike court judgments.