Yukos’ owners have won the largest arbitration award in history against Russia for what was determined by an international arbitration tribunal to be a “devious and calculated” expropriation of its assets.

Russia has been ordered to pay over USD 50.2 billion to the previous majority shareholders of the Yukos oil group in three separate awards heart by the same arbitral tribunal. Yukos was formerly controlled by Mikhail Khodorkovsky, who was Russia’s richest man prior to being imprisoned by the Russian government in a trial that did “not comport with due process of law” according to the arbitral tribunal. He was imprisoned between 25 October 2003 and 20 December 2013, prior to being released by President Vladimir Putin before the holding of the winter Olympics in Sochi. 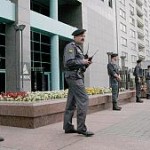 The arbitration awards, which were rendered on 18 July 2014, were only made available today, following a request by Russia for them not to be published. They are available below:

The interim awards establishing jurisdiction on the basis of the Energy Charter Treaty are also available:

The shareholders of Yukos were represented by the law firm Shearman & Sterling, led by the Paris-based lawyers Emmanuel Gaillard, Yas Banifatemi and Jennifer Younan. Some of the members of the International Arbitration Attorney Network, including Christophe Dugué and William Kirtley, served as counsel in the earlier phases of the arbitration. Anna Crevon, who is working with Dugué & Kirtley in its case against Belarus, also served as counsel in this historic arbitration. Russia was defended by the American law firm Cleary Gottlieb.

The arbitration tribunal which issued these historic awards was led by Canadian arbitrator L Yves Fortier QC, Judge Stephen Shwebel of the United States, and Charles Poncet of Switzerland. It ruled that Russia expropriated the Yukos oil company in a series of politically-motivated attacks, as many had suspected at the time. In addition to the over USD 50.2 billion in damages that were awarded to Yukos’ shareholders, the arbitral tribunal has awarded Yukos’ shareholders 75% of their legal costs, totaling USD 60 million, underlining the abusive nature of Russia’s acts.

The largest prior arbitral award was the USD 2.6 billion obtained by Dow Chemical against a Kuwait-owned State entity in 2012. This was a commercial arbitration award. The largest prior investor-State arbitration award in history was the USD 1.7 billion that Ecuador was told to pay US oil company Occidental Petroleum in 2012. The three related arbitrations were initiated in 2004 and took 10 years from start to finish, including a three-week hearing that took place in The Hague. 15 expert witnesses were heard, and over 6,500 written submissions were presented. The most difficult legal question was likely overcome with respect to jurisdiction, since although it was clear that Russia had signed the Energy Charter Treaty, upon which the claim was based, it had not ratified the convention.

10 years ago, the Yukos oil company was growing swiftly, before it was suddenly assaulted by Russia, which suddenly requested the immediate payment of over USD 30 billion in taxes. The primary objective of these taxes was found to be to “bankrupt Yukos,” as many suspected at the time. The arbitral tribunal ruled that the auction of Yuganskeneftegaz, a Yukos subsidiary, was not driven by a desire to collect taxes but “the desire of the state to acquire Yukos’ most valuable asset and to bankrupt Yukos.” Russia’s actions were found to be “a devious and calculated expropriation,” as many suspected at the time. The bankruptcy proceedings of Yukos that followed were ruled to be a final act of destruction for the benefit of the State-owned companies Gazprom and Rosneft.

The arbitral tribunal also found that the treatment of recently-freed Mikhail Khodorkovsky and other Yukos executives did “not comport with due process of law.” It was moreover found that Russian courts “bent to the will of Russian executive authorities to bankrupt Yukos, assign its assets to a state-controlled company and incarcerate a man who gave signs of becoming a political competitor.”

Mr. Schmidt testifies that in the criminal cases against Messrs. Khodorkovsky and Lebedev, Russian authorities violated basic standards of due process and fair trial. In 50 years of legal practice in Russia, Mr. Schmidt had “never seen breaches of due process so flagrant and so egregious,” nor had he ever, even in the “darkest hours of the Soviet regime,” “seen the Russian State undertake such coordinated, systematic and intense efforts, and deploy such huge resources, against a person accused of an alleged economic offense.” The raids resulted in the “massive confiscation” of documents that were not returned. In December 2006, the defendants were transferred to a “pre-trial detention isolator” in Chita and Siberia. Mr. Schmidt recounts that during the trials, seized documents were presented out of context; the defendants sat in metal and glass cages that were equipped with hidden microphones; criminal charges were brought against defense witnesses; and prosecution motions were systematically granted, while defense motions were refused.

Russian Foreign Minister Sergei Lavrov has indicated that Russia, “will no doubt use all available legal possibilities to defend its position.” The award is enforceable and Russia has a 180-day grace period to pay it. If Russia resists, State-owned assets can be seized internationally in the over 150 States that are members of the New York Convention. Russia will likely object to the enforcement of the award on the basis of sovereign immunity during enforcement proceedings, which will buy it time, but will not stop the award’s enforcement. After 15 January 2015, interest will accrue annually to the award. As this is not an ICSID award, Russia will not have the possibility of bringing ICSID annulment proceedings to buy further time.

Having been involved in the arbitration at the outset, it is pleasing to see that even powerful States such as Russia cannot violate the rule of law with impunity. Russia’s recent illegal actions in Ukraine, including the recent taking of the Crimean peninsula, are also clearly in violation of international law and are likely to lead to a string of arbitration awards against Russia in the future.

Such awards are reminders of the teeth of international arbitration and should serve as a reminder that States are frequently perpetrators of illegal acts. There is no good reason why States should be allowed to violate their international obligations with impunity.

The International Arbitration Attorney Network has similar cases pending against Zambia, for its illegal occupation of the prior British protectorate of Zambia, as well as the first investor-State arbitration against Belarus, which we intend to show illegally expropriated his investment in Belarus, while also imprisoning him in a hard labor camp where he was forced to work six days per week and was even forced to watch the dictator Alexander Lukashenko’s long-winded speeches by prison guards.

It would be hoped that such praiseworthy rulings serve as a warning to future non-democratic regimes that international law cannot be violated with impunity.